With the long light summer days and evenings Pasha & Tanni are in their element and determined not to miss a minute of it. As soon as the sky lights up in the east the Siamese duo are up and about ready to greet the new day. As the human contingent continues to slumber on to a sensible hour Pasha & Tanni gallop around the house playing a game of chase which often ends up with the bed as a finishing line. As any cat person will understand having four paws land on you (or make that eight!) while still asleep is not something you want to encourage. But the more you try to discourage a Cat the more it will do what it jolly well pleases. Well that’s the perceived wisdom with which I for one wouldn’t disagree!

Take Pasha. He has a route march every morning at crack of dawn which takes him between a sleeping human and the bed headboard. Try as I might to dissuade him Pasha has other ideas. If he really wants to be get my attention or just fancies being annoying he gets under the bedside lampshade and wears it like a hat. The lamp wobbles precariously before tipping over – guaranteed to get a reaction!

Tanni has his own ‘get the human to do what I want’ repertoire. If the floor has just been cleaned or the weather is wet I might be tempted to close the cat flap till matters improve. But Tanni has no truck with this and not only meows but bellows at me continuously until I am tempted to give in. Once he is out and has got his own way he is sweetness and pie. This works just the same in reverse. Once out and he wants to come in it has to be now even if I am in the middle of writing a magazine feature for Catworld!

You could say the Siamese dudes have their human wrapped right around their eight delectable paws!

With the long days and light evenings Pasha & Tanni spend most of their time outdoors pausing to come home at regular and in Tanni’s case, frequent intervals. Whether to check on whether I am still home or if the food dishes are still well stocked is open to question.

While Pasha known as Mr Adventure visits the neighbours and takes over other peoples gardens or pays a visit to the wildlife in the field Tanni who is more family orientated stays close to home. Here he lurks with intent hiding from the feathered creatures. Mostly he hides under the low-lying branches in the conifer trees waiting to ambush an unwary bird. The feathered locals are on the look-out and know what he is up to. But sometimes a visiting bird will be caught unawares.

I caught him with a pigeon recently, but like many cat people I hoped fervently that the poor creature was already in bird heaven, and that Tanni just happened to pass by. When the same week Pasha jumped up on the window sill carrying a shrew in his mouth I was not as pleased with his present as he might’ve hoped for.

Reluctantly I am having to close the cat flap and open it on demand or leave it open but close off the rooms inside the house.  I love wildlife but preferably outside and not indoors!

Occasionally I manage to race out and grab a sun lounger before the Siamese boys. But unlike them I am more than happy to move over and share should it become necessary. Not so Pasha & Tanni who stretch out their long sinuous Siamese bodies leaving no room for me!

As the sun rays get stronger I try to keep the boys indoors around midday and put a pet sunscreen on the tips of their ears before they go out in the morning.

But to my mind the best part of the day is sitting out on the patio in the evening and sharing the warm sun rays with the Siamese dudes. Watching them skitter and chase around, and clamber over fences and climb up trees just for the fun of it. Stalk and pounce on flying insects which mostly get away.

Others may be happy traipsing the globe but me? I am at my happiest looking out on the world through a Cat’s eyes and learning all things Cat. To my mind it’s one of the most interesting places to be! 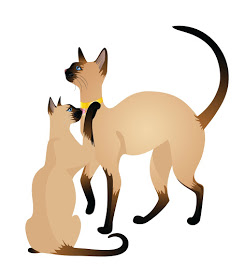 Two mischievous young Siamese Cats born on the same day these Crazy Cancerians are ruled by the Moon making them loving and affectionate.

Pasha a caramel point and the eldest by just a few hours thinks this entitles him to the position of Top Cat. Tanni a chocolate point and a skilled hunter in the play department has no need for a fancy title.

Saffi & Misa were two city Cats living in Brussels and London before moving to a picturesque village in the English countryside, running the household and keeping an eye on the local wildlife and feathered population.

A rich cast of characters appear on the pages as a trail of furry and feathered creatures catch Saffi & Misa’s imagination, and invite comment on how strange humans can be.

A good read guaranteed to bring a smile and lift the spirits! 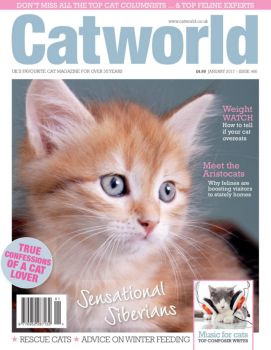 Read Pasha & Tanni's column and see their pics in the latest issue of Catworld Magazine.